I’ve just been posting in my other blog (https://aspergersbigbang.wordpress.com/) about Ghost Map by Steven Johnson, and I don’t think I’ve posted here about my own Ghost Map.

Like many of my research projects, it never seems to get to a final version.  However, since I don’t know when or if I’ll get back to work on it, I might as well share it here.  I wanted to show the relationship of high-volume spay/neuter clinics (labeled), per capita spay/neuter rates (dots) and decrease in shelter deaths (color coded by county).

I’ve found the problem.  Craigslist changed the way they do searches sometime between July 4 and July 11.  It used to be the search for “kittens” did not include ads that only used the singular “kitten”, but now it does, so the numbers are higher.

That means I can’t learn anything by comparing new data to all the lovely stuff I’ve been collecting since 2009.

Well, at least there isn’t the population explosion I feared.  One warm winter didn’t undo the progress made from years of spay/neuter.  *whew* My data on places like Eugene, Springfield and Salem show what s/n can do.

At least here (Eugene) our Craigslist Kitten went down a little this week, although our s/n focus neighborhood, Springfield continued to rise. Nationally, quite a few areas went down this week, so at least their peaks didn’t go any higher.

I’ve done a lot more looking into this.  Although everything I’ve checked out on the CLKI side shows this is an explosion of ads for kittens needing homes, and it really is widespread, I haven’t found any more examples like LA and Austin showing in increase in shelter intake.  But then, I haven’t found any place else where I can get data as good.

Kern County (graphed here with the Bakersfield CLKI) seems to have had a major change in 2013, which radically reduced both dog and cat intake, so I can’t say anything about what would be “normal” to expect this year.  The CLKI could be so high this year because the shelter raised their intake fee, making more people using Craigslist to find homes for unwanted kittens.

It’s possible the general rise in CLKI could be caused by Kitten Season caming late and kittens “hit the market” in a flood, but there aren’t any more per season than usual, even though the peak CLKI’s are higher.

The more I look at, the more convinced I am that we’re in for a cat population explosion all over the US.

(https://en.wikipedia.org/wiki/Perfect_storm “A “perfect storm” is an expression that describes an event where a rare combination of circumstances will aggravate a situation drastically.“)

I can tell myself that everything in the news and blogged about shelters being overrun with kittens is the same thing that happens every year, until they get specific about how it’s worse this year, especially when they quote actual numbers.

“Close to 10,000 cats have come into Animal Care Centers of NYC, the non-profit contracted by the city to handle homeless animals. That’s at least 1,000 more cats than this same time last year.”

What really strikes me is that’s a 10% increase and, on average, CLKI’s are up 10% from last year.

Someone did predict a cat population explosion from global warming, but they did it as a joke.  And that was in 2007.  I don’t see anything funny about it, except maybe “the importance of neutering and spading”

Here’s a more regional view.  Looks like there’s more of a spike on the West Coast than East Coast.  Except for Wilmington, NC.  (Side note, their spike started last year, though.  I suspect that’s something else going on there.  I should look into that.)

I’m looking more closely at the CL data to see if there might be some explanation in a change in CL or something I’ve done wrong but I can’t find anything .  For example, one of the sharpest spikes was Chicago.  As with most places, the count for “dog” ads stays about constant, but the number “kittens” hits went from 70 to 141 in one week.  They look like they’re almost all kittens needing homes and nothing to show any one rescue group is flooding CL.

And Eugene is about the same way, dog ads about 250 every week, but kittens going from the teens in Jan, up to 53 the first week of July, 72 last weekend, 76 right now, almost all kittens looking for homes.  Last year the peak was 51, and it didn’t get that high until October.

Cats in my bed

The Kittens Are Coming!

I’m seeing a shocking jump in my Craigslist Kitten Index (CLKI) almost everywhere. So far, I’m seeing confirmation from shelter stats that there’s a population explosion going on, I’m assuming from the record warm winter we just went through. I see a disaster on the horizon.

CLKI’s usually peak after Aug 1 on the West Coast, earlier on the East Coast, but the peak values for the year are already above 2014.

A few shelters put monthly stats online and those I’ve looked at so far seem to confirm this. 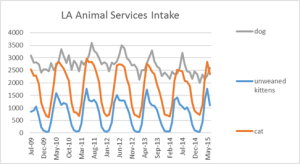 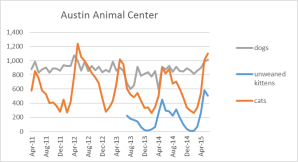 I don’t have as much historical data for Austin, but it looks the same.

My Twitter friend @Caretaker_Cat asked me to make this. Not being familiar with the tv show, I probably can’t appreciate it fully, but I had fun making it. 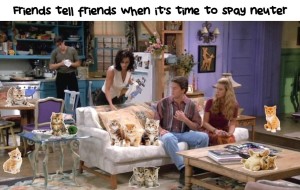 I wonder if this post will get a lot of traffic because people will think I’m talking dirty.

But, no, this is just my typical passion for numbers and spay/neuter.

Let me share some numbers I just figured out this morning. I’m looking at an estimate for the cost of remodeling an existing animal shelter, never mind building a new one. For that same amount, they could fund a s/n clinic that wouldn’t just offer 5000 free s/n per year, but pay folks a “bounty” of $5 each to bring in their pets (or strays, or their neighbors’), pay a trapper/transporter to help, and do some serious advertising/propaganda about the importance of spay/neuter, for TWELVE YEARS.

Wouldn’t that do a lot more to save lives than any shelter building?

I’ve only skimmed this, but I like really appreciate any analysis of the real data.

In my last blog, I disclosed New Jersey’s depressing animal shelter statistics. This blog explains why so many dogs are losing their lives in the state’s animal shelters and whether these facilities can end the killing.

Successful organizations set measurable goals and regularly monitor their performance. Examples include financial budgets, customer and employee satisfaction surveys, and product reliability metrics. Unfortunately, many animal shelters for far too long have failed to set lifesaving goals and standards. Municipalities, donors and volunteers need to know where their resources will be best utilized. Time and money are scare resources and people should allocate these assets to organizations who will best utilize them. As a result, animal shelters need to set goals and hold their leadership and staff accountable for achieving these objectives.

Women who made a stir in history for their less-than-perfect behavior.

my incompetent life
Aspects of Aspergers

perspectives from the spectrum

The Proper Amount of Blues and Greens
Seventh Voice

Simply my take on living life as a female with Asperger's Syndrome.

Musings of an Aspie

one woman's thoughts about life on the spectrum

Don't get too comfortable with the familiar--other stuff exists, so go explore!

Gary McGath's blog on almost anything

The greatest WordPress.com site in all the land!